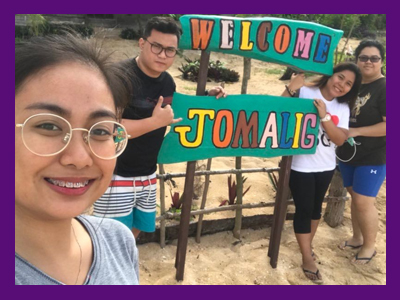 Years before Jomalig Island in Quezon Province became a popular tourist destination and was named the Hidden Paradise of the Pacific, a group of AB Communication students from Southville International School and Colleges (SISC) already featured the island in their 2019 public relations campaign entitled “Halina sa Jomalig: a Public Relations Campaign for Jomalig Island”.

Composed of Karlo Patrick Culala, Hazel Loui De Guzman, Erika Mae Gene­ral, and An Gabriele Gorgonia, the team came up with the idea of promoting the island as one of the must-visit travel spots in the Philippines for their thesis. They studied communication strategies on how to increase visits to the island, manage the social media accounts of the local government and ensure that the contents posted speak of the breathtaking beauty of the islands to make people excited to come. They were given the opportunity by the Tourism Office of the island to moderate the comments and messages of the accounts.

Eventually, their efforts caught the eye of the researchers of the popular  TV show Kapuso Mo Jessica Soho which featured the island in one of its episodes.  This paved the way for the islands to be discovered by more people.

The students were stunned and overwhelmed by the impact of their campaign with Mr. Julius Segovia, another TV personality, making a feature on them in his blog.  Three years after their PR Campaign, Jomalig Island has become one of the major tourist attractions of Quezon Province alongside Kamay ni Hesus and Mt. Banahaw among others.

Karlo, Hazel, Erika, and An, do not need any recognition for what they have done. To them, it is more than enough that their thesis led to the booming tourism industry on the island which was once unknown. Now that tourism in the area has surged, the locals have more sources of income and livelihood. The students wish to extend their gratitude to their thesis adviser, Mr. Mike Manansala, for guiding them in their project.