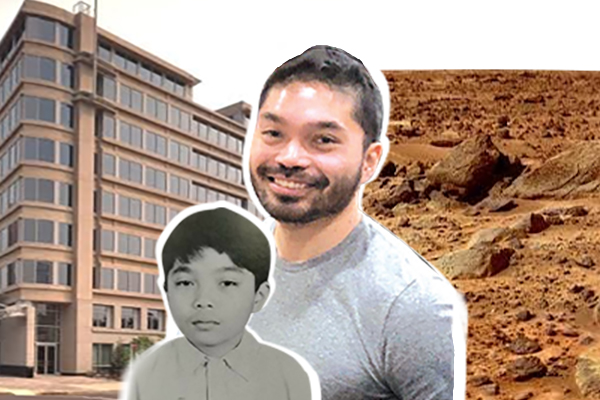 “I think what led me to pursue engineering is simply my curiosity on how things work, which then matured into the possibility of life on MARS, a mission I am honored to be part of.”

NASA’s Mars Exploration Program formed in 1993 has been in constant endeavor to discover past and future human existence through a series of innovative attempts. Southville alumnus Mark Gonzales has been working for NASA’s Jet Propulsion Laboratory (JPL), a leading robotic exploration center of the solar system. Gonzales made a bolder move in his career as the Test Lead Vision Processor of Mars 2020 -Rover : PERSEVERANCE, the fifth exploratory vehicle to explore the said planet. Gonzales and his team led the obstacle avoidance of this mission through image processing as the rover was successfully shipped and currently hovering into space with its expected return to Earth by 2031.

Gonzales studied engineering and graduated Magna Cum Laude from the California Polytechnic University. He is currently having his master’s degree in electrical engineering at the University of Southern California. He finished grade school from Southville International School and Colleges (SISC) in the Philippines. He recalls being a shy student yet very much interested in the why’s and how’s of things and the in-depth purpose of lessons he was taught about. He was particularly into the subjects Math and Science. Through these subjects, he developed a keen sense of curiosity which he considers a big factor to becoming an engineer. On discovering Southville, Gonzales shared:

“I remember Southville being a top international school recommended to us. But more than that, we liked the uniform. Then, it is when I went to the US that I realized Math and Science subjects in Southville surpassed the GED standards as the lessons embedded in their advanced international curriculum only took place in my college days.”

When asked which part of studying at Southville he liked the most, he affirmed how Southville students are taught to explore the merit of such learning experiences, being able to answer why they study a particular topic primarily. A simple Math equation, as far as he could remember, would challenge him to understand how and why formulas work their way. Curiosity is something that he can never outgrow up to his professional endeavor which brought him to a destination humans aim to reach someday.

The successfully shipped rover made noise on the internet, well-applauded and criticized. Netizens expressed their opinions on what world leaders should devote efforts and money for and the billions of dollars being spent for Mars Exploration Program caused a stir online. Yet, Gonzales believes that the MARS 2020 mission is of the same significance to invest on for future mankind. He concurred, “I’d like to take it from how the Spanish people discovered a world they never thought existed. It is the same for us in JPL and NASA.Through massive explorations, countries that we know now arose. Yes, while poverty and the current pandemic yearn for global attention and solution, NASA has to stick with its prime mission to prepare for the future.” Gonzales’ intercultural mindset set forth from preparatory wins at JPL to great opportunities at NASA. From an eight-year-old Southville Monarch to a competent engineer in his early 30s, he is now on top of Rover: Perseverance and its anticipated successful return will count years of massive engineering challenges alongside personal growth.

Mark Gonzales is among Southville’s TOPNOTCH ENGINEERS who have made their names at the world’s finest institutions. Mark has been fairly exposed to the various disciplines of engineering, aiming to professionally transition into ROBOTICS alongside his higher education pursuit.

“I believe that Southville’s Math and Science curricula (as well as all its other subjects) will give each and every student the ammunition they need to truly make a difference in this world. I would like to give my utmost appreciation for everything that my alma mater does!  Southville will always have a place in my heart as one of the building blocks that helped me get to where I am today. “