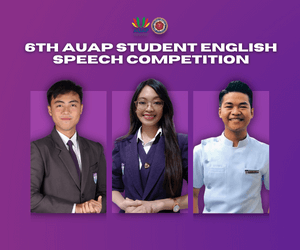 Two other Monarchs made it to the Top 15 namely Jomari Villacruzes of BS Nursing and  Kiel Martin Gutierrez of BS Tourism. Around three hundred students joined the annual competition that showcased the talents of students from Asia and the Pacific in organizing their thoughts, preparing their speech, and delivering it based on a given topic.

In the final round of the event, Khryzelle Lorilla talked on the topic “Viewpoint of Negative Obsession with Artificial Intelligence,” Jomari Villacruzes on “Using Animals for Entertainment Should Be Banned,” and Kiel Gutierrez on “Necessity of Bridging Cultural Differences and Exploring Different Perspectives.”

“We try to minimize the possibility of error, but data incorporated in Artificial Intelligence is only as good when it is properly trained. Without proper time & effort spent on training data, then this becomes increasingly problematic especially when one becomes too reliant on unchecked data utilized in Artificial Intelligence,” said Lorilla in her award-winning speech.

Robert Ignacio, a Southville International School affiliated with Foreign Universities student, also made it to the semi-finals.