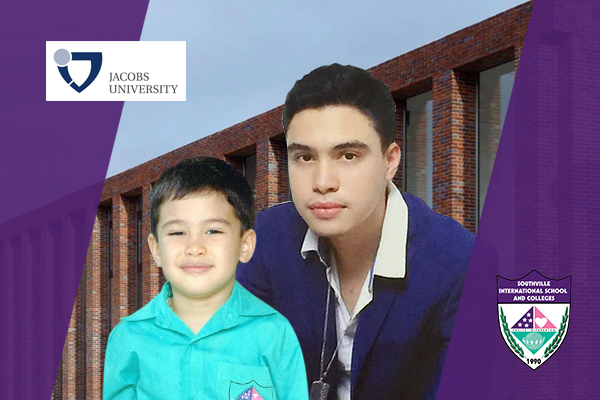 With Germany known as the largest European economy and home to some multinational conglomerates such as Adidas and Volkswagen, a scholarship for an aspiring business major is a privilege; more so, an honor. Southville International Baccalaureate Diploma Programme (IBDP) graduate, Kevin Sagovac, was recently granted a scholarship from Jacobs University located in Bremen, the only English-language private school in Germany for his outstanding academic performance and other personal achievements. Sagovac feels honored to have this achievement that would help bring him towards more opportunities in the future. At Jacobs University, he will be taking a major in International Business Administration and a minor in Psychology.

Sagovac had been a Southville Monarch from kindergarten all the way to International Baccalaureate Diploma Programme (IBDP) level. Through Southville’s international curriculum from preschool to high school and the IB programme that instilled in him an intercultural academic mindset and competence, his hopes to expand his global network with diverse individuals and his interests in subjects such as Finance, Logistics, and Marketing will surely get him the best seat in a first-world country like Germany , one of the top study abroad destinations. “I chose International Business Administration because I see how much impact globalization has on the world and I would like to do business across different countries and try to provide value towards different nations uniting through business,” Sagovac shared. He also aims to apply his minor in Psychology so he could better understand how people make decisions and how they can be persuaded in business contexts. When asked why he chose business among other programs and the future of the business industry in the event of COVID-19 and onwards, Sagovac said, “I see the future of the business industry venturing more towards digitalization and Artificial Intelligence (AI),” which have led him to render internship services at an  IT consulting firm’s marketing department and nurture his knowledge on technical solutions necessary for his chosen career. Sagovac’s combined interests in both fields represent the quality of Southville graduates who are not just multi-skilled but also are aspirants of the world’s most in-demand professions today.

Apart from maintaining good grades, he continuously dedicated his efforts towards various extracurriculars such as being a part of the football varsity team until 11th grade. During his years in IB, he also volunteered for the Red Cross, participated in ISAC tournaments, and helped organize the Model United Nations (MUN)  events among many others. He considers Southville’s capital market training as key to his acceptance in Jacobs University and commended Southville’s teachings on grit and leadership as essentials for a young aspirant like him to flourish in the trading industry. “In Southville, they place a big emphasis on business traits like leadership which is important if you want to influence a large group of people and grit that shows you can always develop yourself further as long as you are willing to put in the work,” he said.

Southville warmly congratulates Kevin Sagovac for his achievement and wishes him well in his future endeavors.