The Tournament of Champions was participated by 2,300 world scholars from 344 schools from 58 countries worldwide. Southville initially qualified at the regional and global rounds, took a tight grip on the long-awaited opportunity to make it at the final meet. Ten months of preparation were spent through rigorous mental conditioning, collaboration of Southville’s top academic coaches, and thorough selection of students who had to pass the institution’s standards on ACADEMIC COMPETENCE, INDIVIDUAL MATURITY, EMOTIONAL STABILITY, and COMPLEX CRITICAL THINKING.

“Ten months of hard work” as one of the team member recalled and said that summer became exhausting yet rewarding days of trial and error. The students together with the coaches could not hide the smiles on their faces with a taste of triumph that they will truly cherish as they bid Yale University a victorious goodbye. Their debut at the WSC is another proof of Southville’s vision and mission to ensure students’ success in the 21st century, celebrated worldwide. 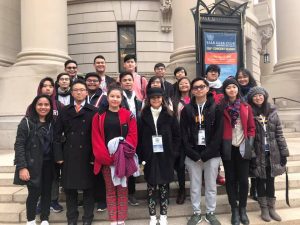 “In the most trying times, we learned to be more resilient in the face of adversity. We did not allow difficult circumstances to drain our optimism and enthusiasm, instead, we used them to accomplish this humble achievement. Our performance in our debut at the World Scholar’s Cup 2018 is commendable. But as the culture of kaizen and growth mindset live in our hearts, we will come back stronger in the next season!” said Mr. Gio Pastor, IB English Instructor and Head Trainer.