“The moment was so surreal. I can’t believe that I finally have a crown on my head and that I’ll be representing the Philippines in an international pageant. The first ever Filipina to compete in Reina Hispanoamericana. Thank you to all who believed and supported me! The competition will be tough, but I know I can make it through for … [Read more] 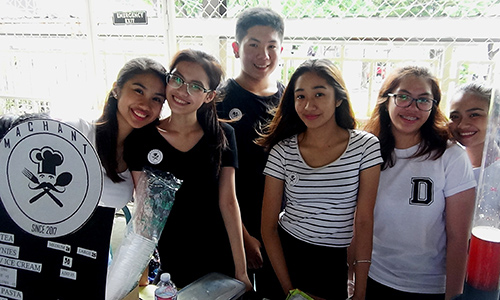 August 31, 2017- The Accountancy, Business & Management (ABM) students of Southville International School and Colleges supported the High School Intramurals by hosting a two-day Entrep bazaar at the Monarchs Gym, practicing their skills in entrepreneurship as they commence yet another year of learning and growth.

Intrams and bazaars have always been a primary event in Southville as it allows students to participate in recreational sports and business as they advance to become movers and leaders in the global community.

In this bazaar, students showcased a wide array of food products, novelty items and enjoyable games that showed their creativity … [Read more] 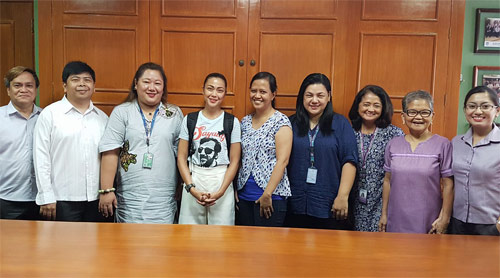 June 6, 2017 – Renowned actress Jodi Sta. Maria proved that not even show business can stop her from pursuing her dreams as she enrolled for BS Psychology in Southville International School and Colleges through the INNOVE Education Solution.

Jodi will be taking BS Psychology as a premedical course, a stepping stone to medical school.

“It is Jodi’s dream from the start to be a doctor. Being in the field of Psychology will prepare her to see a different perspective of medical course. Her selfless intention to help people will guide her in understanding people’s mind and behavior. We in … [Read more] 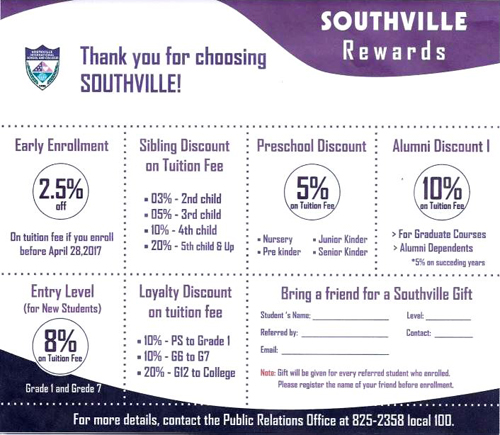 Southville International School and Colleges is inviting everyone to avail the various discounts offered for School Year 2017-2018:

• Early Enrollment Discount
‣ Get 2 percent off on Tuition fee if you enroll before April 28, 2017

• Preschool Discount
‣ Get 5 percent off on Tuition fee for students enrolling in Nursery, Pre-Kinder, Junior Kinder, and Senior Kinder

HOW TO ENGAGE PRESCHOOLERS

Preschoolers are naturally curious. They are eager to explore their surroundings and know how things work. To engage young minds, the Preschool teachers of Southville International School and Colleges develop the project approachmethod in teaching young children.

Understanding Multiple Intelligences of the Students

“Each person has a different intellectual composition.”

Through the years, the definition on what intelligence is has been on a broader scope. Human competencies are now based on more diverse combination of traditional and non-traditional intelligence including interpersonal, intrapersonal, musical, spatial, and kinesthetic that were long overlooked. Educational institutions especially international schools in the Philippines should find ways on how to apply these multiple intelligences in the classroom.

There are advantages perceived to be connected with enrolling in an international school and we listed some below.

The Amadeus certification program is an internationally recognized certification course training students to become proficient with the Amadeus Reservation System. Amadeus is currently the world leader in-terms of market share (49.2% US market share) and using the Amadeus system is the de-facto standard for travel agencies worldwide.

The Amadeus reservation system is used by:

Psychology Society proudly organized the Filikula on the 29th of August inside the Mini Theater at 12:30 pm to approximately 5:30 pm. It is a film showing conducted by department to manifest its support for Buwan ng Wika. Fortunately, tickets were sold out a day before the event, and the venue was already packed a few minutes after the first film began rolling. Students coming in were asked to register first at the front desk before proceeding to enter.

Is the child gifted?

Officially, the definition is three percent of the student population, and with an I.Q. of over one hundred and forty. This varies from country to country, but the more able should not be confused with gifted. More able is defined as the top 15 percent. The needs of the gifted are equal to those with learning difficulties-both groups need guidance and appropriate challenges.

In most countries, the needs of the less able are more supported than those of the gifted child. Because perhaps these needs are more observed and apparent. The following are characteristic demonstrated by … [Read more]

● wilbert beltran ● January 28, 2019 ● ● No Comments
Students have a lot of going through their life. Too many projects, too many subjects to study, too many things to learn, too many terminologies to memorize, and you only have 24 hours per day. No wonder it’s never easy to manage your time effectively especially if you are studying in one of the international schools in Manila. .
Plan ahead of time.
As Benjamin Franklin put it, “If you fail to plan, you are planning to fail.” This is why before anything else, you need to plan ahead of time. List down all the things you need to do.
… [Read more]