Out of more than a hundred students from all over the country who took the competitive Top Outstanding Performing Students (T.O.P.S.) examinations of Southville International School and Colleges (SISC), twenty hopefuls are one step closer to reaching their dreams of pursuing college education in an international educational institution.

They were lauded during the T.O.P.S. awarding ceremony held last February 29, 2012 at the School of the Future (SOF) – SISC Media Center. Scholarship grants in the different courses of SISC, as well as South SEED LPDH College (SSLC), were made available to the successful examinees.

The P.A.S.S. or Portfolio Assessment for Students of Southville International School and Colleges. Research Program teaches the graduating students the value of scientific inquiry and advancement of knowledge. It provides them opportunities to demonstrate the various competencies they acquired in the different subject areas like English (writing and organization), Science (investigatory projects/experimental research), Mathematics (statistics/graphs), and History (historical analysis and perspective).
Graduating students in High School and Grade School are now very busy with their PASS research.

Below are some of the experimental research topics of Grade 6 graduating students: 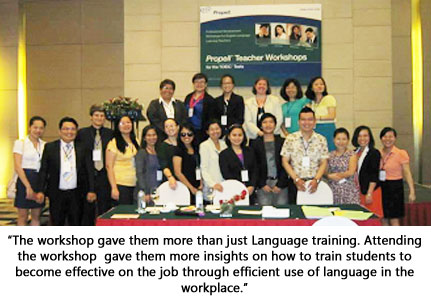 English Language Teachers from the Philippines, Vietnam, Cambodia and Israel met in Hanoi for the six-day Propell Teacher Workshops in the various components of the Test of English for International Communication (TOEIC). Jennifer Sakano and Elizabeth Park, Assessment and Program directors respectively of the Educational Testing Service (ETS) flew in from Princeton, New Jersey to conduct the workshop in the posh Pullman Hotel.

The Philippine contingent made up of Language teachers from Southville International School and Colleges, Lyceum of the Philippines (Batangas, Cavite and Laguna), Mapua Institute of Technology and De La Salle University … [Read more]

The students conducted an online election via Moodle. Ms. Antonette Ramos, StudentAffairs Coordinator for College said, “With the help of Southville’s MIS (Management Information System), we were able … [Read more] 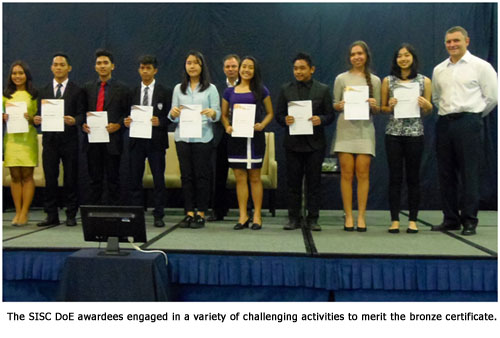 Eight students of Southville International School and Colleges (SISC) were among those who received their Duke of Edinburgh (DoE) Awards. Sofia Angela Aquino, Julia Hong, Kim Ye In, Christina Meneses, Rae Ann Tamayo, Maria Joan Wilson, Isabelle Young and Baeg Yuna received their Bronze Award from the Head of Mission of the British Embassy to the Philippines, Mr. Trevor Lewis, in recognition of their outstanding success in educational activities and community services.

Founded by Prince Philip, husband of Queen Elizabeth II, in 1963, the Duke of Edinburgh’s International Award is the world’s leading youth achievement award operating in over 140 … [Read more]

As school year 2015-2016 opened, the Southville International School and Colleges (SISC) family welcomed the new students and their parents to the New Students and Parents Orientation. After the general orientation, a breakout period with the respective colleges was held to give each college an opportunity to welcome their new family members.

Southville International School and Colleges (SISC) partners with Munhwa Broadcasting Corporation (MBC), one of Korea’s biggest broadcasting networks, to host the 2012 English as a Second Language (ESL) Global Camp. The ESL Global Camp spearheaded by MBC is conducted simultaneously in other countries such as the United States, New Zealand, Canada, Australia, and Singapore.

More than ninety Korean students from Grade School to High School are currently attending ESL classes in SISC to hone their written and verbal English communication skills while interacting with other fellow delegates and learning more about the Philippine culture. The program will run from … [Read more]

For 25 years, Southville International School and Colleges has proven its steadfast commitment in providing the highest quality standards of international education to its learners. In line with its strong vision to produce globally competitive achievers and movers of society who will make a difference in the 21st century and beyond, SISC is very proud to announce that it is now offering Graduate Studies Program that are structured to provide advanced professional studies for learners and professionals; ensuring continuity of their strong academic and holistic edge and gearing them for the most sought-after global professions of today.

BS Tourism graduate Gylliane Canseco is a candidate to be the People’s Choice Winner in the 10th Las Piñas Waterlily Festival. As one family, let us show our support for Gylliane! To vote for her, please follow the directions below:

The candidate with the most Likes and Shares wins.