With its commitment to developing and equipping lifelong learners to be globally competitive, Southville International School and Colleges is very proud to announce that some graduates of Basic Education Class 2016 will be joining the most esteemed universities around the globe such as the Imperial College London, University of Leeds, University of Bristol, and University of Sheffield in England.

Verniece Enciso, a champion skater, found another love and source of achievements: modeling. She was named Female Model of the Year in Ateneo de Manila University’s Mirage Fashion Show last January 29, 2011. Almost a hundred hopefuls auditioned but only twenty fresh faces made it to the finals. The event is an annual fashion show for high school students.

Go away into a journey of true magnificence and adventure in the Global Village Program – Palawan Tour on April 22 – 24, 2013 for Grade 5 to Grade 12 students. Discover Palawan’s unhurried and largely undiscovered charm with a tour package that includes:

The Global Village Program is a unique, personal,and inter-cultural learning experience provided by SISC to its students. The travel program gives participants learning experiences they cannot acquire in the classroom as … [Read more]

Former Southville Subject Area Head in the late 1990s, Dr. Edgar Tibayan, has been selected as a regional Outstanding Principal that qualifies him as a finalist to compete for the title of Outstanding Principal of the Year in Texas, USA. At present, Dr. Tibayan is the Principal of Lucy Rede Franco Middle School in Texas since 2011. He will represent Region 18 in the Texas Association of Secondary School Principals (TASSP) competition.

Dr. Tibayan attended Cavite State University where he graduated with Bachelor’s Degree in Agriculture major in Education and minor in Economics. He obtained his Master of Arts in … [Read more] 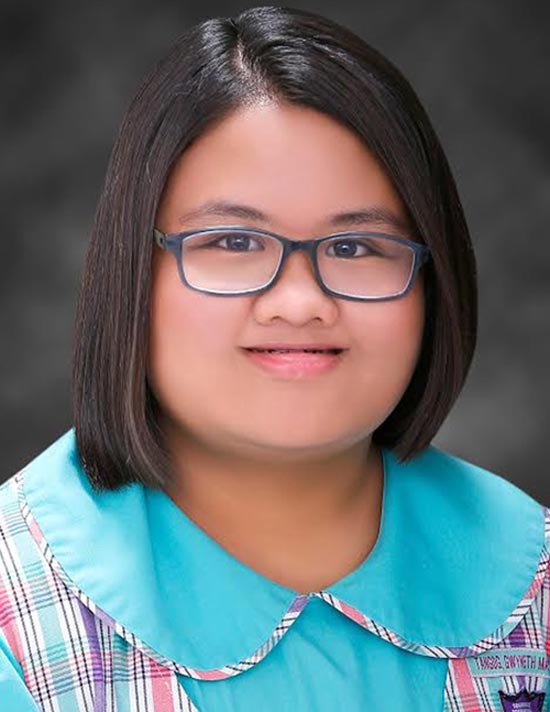 Gwyneth had to answer multiple choice, fill in the blanks, and problem solving questions in ninety minutes to gauge her mathematical ability. She qualified for the international competition upon … [Read more]

College Students Commit to 5Cs of Success in Convocation

The 5Cs (Competence, Character, Collaboration, Commitment to Achieve and Creativity) Convocation was held last July 24, 2011 at Luxembourg Gym with the theme “5Cs in Action”. It was attended by about 200 students from the IC 1 – SISC Hallmarks and NSTP 1 classes.

Dr. Virginia Caneo, Dean of General Education, welcomed the participants and shared the importance of the 5Cs in enjoying and enhancing college life. Dr. Marl Ferenal, SISC President, gave inspiring thoughts about the relevance of the 5Cs in attaining success. Ms. Marie Vic Suarez, Basic Education Principal, shared the “10 Lessons We Learned from the … [Read more]

Southville International School and Colleges, the only international school in the Philippines offering a complete array of educational programs and officially recognized as an educational institution of international character based on Republic Act (R.A.) No. 9493, is now offering Master’s Program in Business Administration, Information Technology and Psychology.

The Master of Arts in Psychology program adheres to an empirical model of integrating scientific inquiry that is committed to the responsible practice of Psychology. The program aims to equip graduate students extensive skills, competencies and theoretical knowledge with a strong foundation in Psychology.

The Master in Information Technology program aims to … [Read more]

In line with their subject “Tourism Internship 1”  the 4th year students of the Bachelor of Science in Tourism underwent a seminar entitled “Image Enhancement and Power Dressing” last August 5, 2014 at the Multi Purpose Hall of the Tropical Campus.

The seminar focused on the goal of building self – esteem and confidence through proper dressing and posture improvement. The seminar also touched on the basics of dressing up in corporate attire, mixing and matching of clothes, and wardrobe essentials for the tourism industry practitioners.

The resource speaker for the seminar was Ms. Leizel Obuga, Directress of the MSI … [Read more] 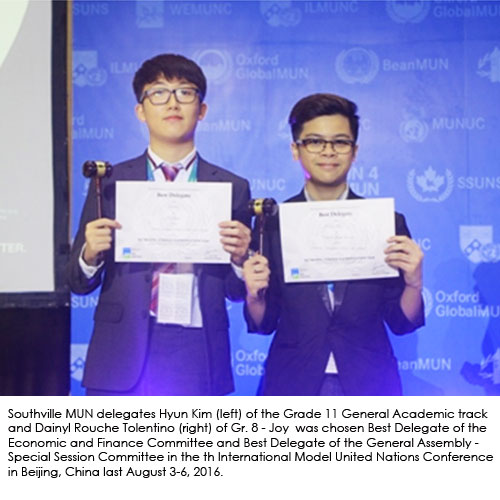 The Southville International School and Colleges (SISC) Model United Nations (MUN) delegation returned from the 9th International Model United Nations Conference in Beijing, China with the top awards as the only Philippine representative. Hyun Kim of the Grade 11 General Academic track was chosen Best Delegate of the Economic and Finance Committee while Dainyl Rouche Tolentino of Gr. 8 – Joy was also named Best Delegate of the General Assembly – Special Session Committee.

They joined more than 800 delegates from 100 schools around the world at Beijing Yanqi Lake International Convention Center from August 3 – 6, 2016. The … [Read more]